I have always been a big fan of Goldratt's work, especially his Theory of constraints work. Perhaps the biggest impact this work had on me was that it got me thinking about what constraints impact systems and the how slack capacity impacts throughput in much clearer terms.

Slack capacity means that the overall system has capacity in reserve that you can call upon when you need to. To have this reserve it means you must be running at least one step in the process under the theoretical maximum capacity at any given time. But in the current business cultures it's very hard to actually deliberately have a policy that will run some component at less than 100% of its maximum. People face pressures when outsiders who don't see the full context of a system see some line item where something is not running at 100% and they ask "can't we eek out a bit more here?". Being able to push back at this mundane but utterly wrong way of thinking is an important aspect to actually running the most efficient organization possible in a holistic sense.

Currently western culture has put a very high emphasis on improving efficiency in a somewhat reductionist manner. The traditions of science and many western patterns of thought tend to look at a "divide and conquer" type of attitude to solving problems. This has got very popular I think because it's fairly easy to understand and is a very powerful approach when it can be applied effectively. When dealing with complex interconnected systems a naive approach to optimization often turns into a self defeating affair if people don't actively think about the interconnections between processes since. Capacity and throughput through a system can't be fully understood by looking at each component only in isolation.

Which brings me to food and food security. 2020 has seen enormous disruptions to supply chains, the toilet paper panic of 2020) is a great example of a supply chain shock and one that people will likely look back on humorously1. Less humorous are supply chain disruptions that lead to famine and starvation. If there's no slack capacity in the food supply chain then any significant interruption means literal starvation. Because of the events of 2020, including the big locust plagues in Africa in the middle of the year, the floods in China, combined with a huge number of damaging fires fist in Australia then later in California I'm actually quite worried about aspects of the food supply chain in many parts of the world. The main reason I worry is because the slack capacity in the system to deal with problems has been reduced over the years and many supply chains are actually less resilient than they used to be. I suspect that there will be disruptions to the food supply in many parts of the world in the early months of 2021 and this prediction is the motivation for me writing this post. Part of this that in many parts of the world farm work has become dependent on exploiting an underclass of migrant workers but the pandemic has disrupted travel and has therefore prevented this underclass from being able to work on the farms. So please do take the chance to get you and your family prepared by having a few weeks of long term food supplies ready before this time. Even if there's no outright disruptions to the food supply chain I expect the prices of food to spike heavily in 2021 in many countries, especially if they are import foods, so the purchasing of some long term food will be a good investment in any case.

While doing some research for another piece I was writing I came across some photos from Chicago from the time during and just after they ended prohibition. Some things immediately stood out to me, like seeing that a newspaper cost 2cents and a beer was 3cents. Given the extremely strong purchasing power of a dollar back then (at least compared to now) the huge amounts of money earned by gangsters who got heavily involved in the illegal alcohol industry are put in perspective. This massive rise in organized crime in response to regulations is a very interesting example of unintended consequences. But there were a couple of photos that left me in a state of bemusement for days but I didn't know why at the time: 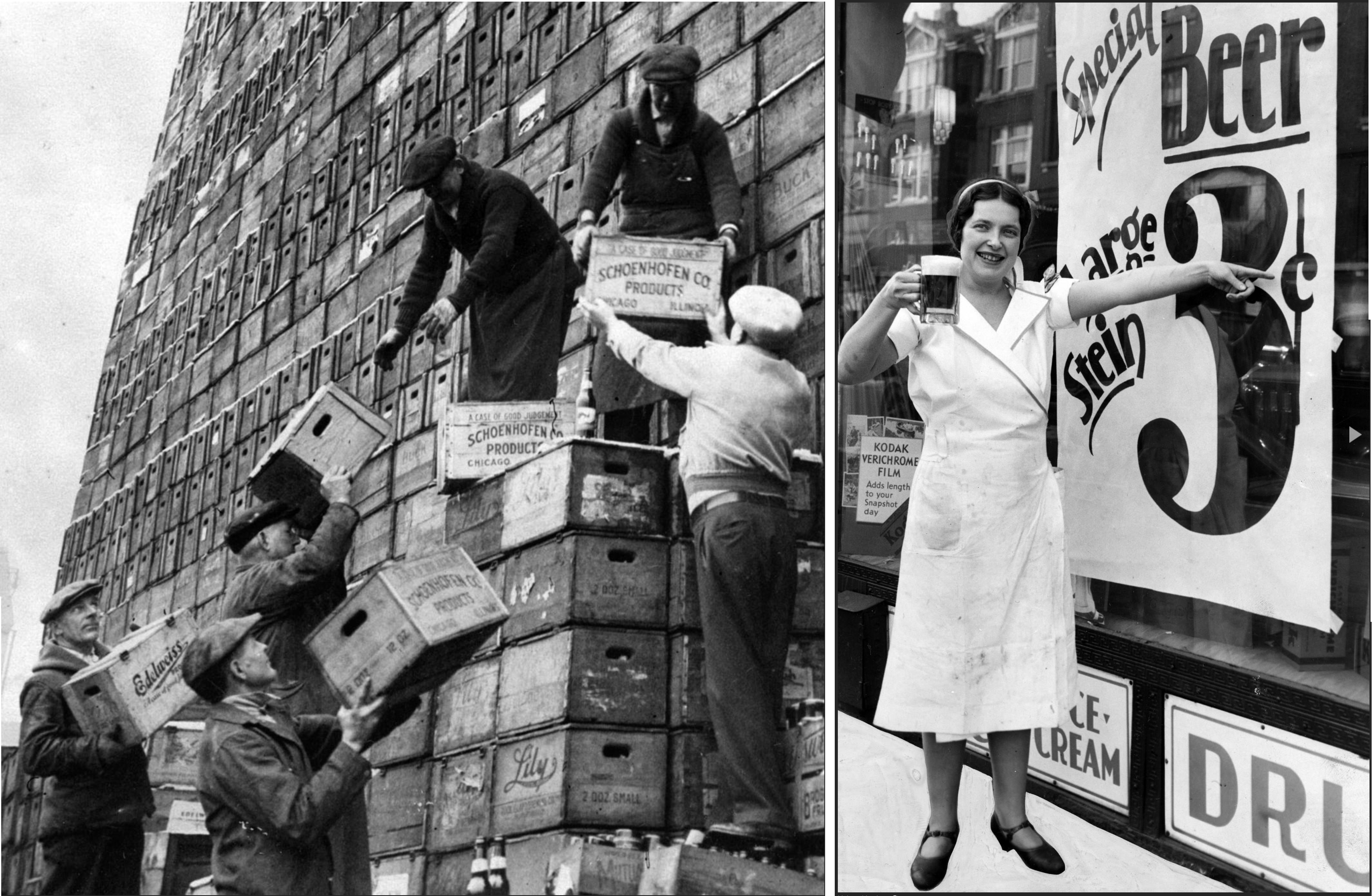 I remember thinking at the time, wow that's a high pile of boxes. It wasn't however until I saw this article that I really started to think more deeply about what's changed since then. When walking by a modern supermarket it struck me that we just don't see bulk warehousing in close proximity to either the producers or the consumers anywhere near as much now. Many places built an increasingly big dependence on Just-in-time logistics techniques where goods are delivered just before they are used. Specifically a modern factory might think "hmm maybe we can save on real estate costs by just getting the crates we are using shipped in at the last moment so we don't need as much storage space". This pressure to reduce storage space is so advanced in places that have massive real estate bubbles that it immediately destroys some percentage of slack capacity right there. The issue with this reduction in storage capacity is that it saves money on the average days at the expense of making crisis days much worse. In a short term economy that's plagued by the problems of financialisation the temptation for managers to "get their bonuses" by trading future problems for short term KPI gains is too hard to resist. But I think in important areas of national security such behaviour really isn't appropriate since the harms of failure impact far more than just the firms involved.

Now none of this is to say that an infinite amount of slack capacity in the food supply chain is acceptable, because it clearly isn't. I remember there was this food court restaurant near where I worked and at the end of the day, each and every day, they threw away an enormous amount of food. Literally straight into the bins, no attempts to sell it at a discount, no attempts to give it to the needy, no attempts to compost the waste, nothing. On the way to and from work I'd see a lot of homeless people doing it tough, and I couldn't help but wonder how we as a society arrived at this point. The amount of waste wasn't small either, on the worst days they threw out more food than they sold. Once I found that out it was so annoying that I actually stopped going to that restaurant entirely.

I suspect this was due to a food court policy, I think all the vendors there were required to not offer end of day discounts and this caused them to throw out substantial amounts of food at the end of the day. Because there were a lot of stores there that opened and closed at different hours the dynamic I'm sure was to do with avoiding closing hours of some stores selling food at a discount cutting into the takings of the other stores. Overall I still feel this situation is a very bad one, stores were consistently making too much food and not selling it. But also the rules prevented any ability to sell the excess. Nobody seemed to want to actually take on responsibility to fix this issue and you noticed this guilty look when you brought up the massive wastage, people knew they they were part of something bad but they just didn't want to have to think about it.

This sort of dynamic is why many countries have laws about gleaning, if food or product is being thrown away these places have legal protection for those people who may wish to make use of the waste. Overall I think this is a good type of law because it can help prevent certain types of capricious wastage or at least reduce the incentives for doing so. On the other side of this you do want people to consistently make more food than is consumed because this allows sensible responses to shortages. If regulations come into force that create perverse incentives for people to make less food than is actually needed this would be bad.

I think overall the best way to think about these problems is in terms of managing capacity and throughput for the system as a whole rather than efficiency of any individual process in isolation. The main constraint that we have is that we wish to consistently and sustainably make enough food for people to eat. Thinking about this at a systems level is the only way that we will be able to make any effective policy decisions in this area that don't come with a lot of perverse incentives. Part of this involves accepting that the best overall system will consistently lose a small percentage of food every day, this is really our insurance against starving if anything goes wrong. In some senses that food isn't wasted, it's a payment that is made such that fewer people starve if there's a "black swan" type of event. Ironically as systems get more "efficient" in removing what's seen to be the "waste" at each isolated step we are seeing overall systems that are far more prone to catastrophic failure.