Lately I've been struck by just how terrible the global macroeconomic situation is. Despite this there's a huge number of commentators who are aggressively pushing a narrative that everything is fine. And people buy into the lies, including smart people who I really think should know better. I think there's a variety of reasons for people to do that, perhaps one is that we have had such a long bull market in certain areas, eg bond market, that some investors simply have never seen a bear market. The thought of a massive bear market is literally unthinkable to many as they have no mental models to actually conceptualize it. If you've never seen a bear market it's hard to really react properly when one does pop up. "Buy the dip" has become something of a religious activity where people believe as a matter of faith that "the markets always go up" so therefore buying all dips is a profitable move.

There's a lot of people who have vested interests in saying that everything is fine who will lie through their teeth to support whatever happens to be profitable for them. We saw a clear cut case of this over the last two years with the people who were claiming there would be no inflation. We saw this with people claiming that Quantitative Easing was not inflationary. We saw this with people claiming that supply chains were fine. This sort of crowd encourages people to buy all the dips with the assurances that everything will be back to all time high soon, just don't miss out.

Perhaps one of the most instructive cases to look out for are the people that lie to generate exit liquidity. The way in which this particular play works is that if you have a large position in some sort of asset that you wish to sell it may be hard to sell a large position without dropping the price. Far too many people have a misconception about the price of assets being constant with sales, and that misconception forms because peoples intuitions are formed from small purchases and sales which don't move the market.

Eventually things get really bad and illusions can't be maintained. If you look at the data carefully many illusions are immediately shattered. When you start looking at the data first it changes you and you just can't ever go back to a narrative-first approach. Your entire outlook on the world shifts because you can't help but look at the data and inevitably this means grappling with all the statements that people make that are detached from the reality of the markets.

Currency pegs and why collateral matters

To be clear I think there's a number of reasons why stablecoins matter and I'd recommend reading the linked article if you'd like to know more about why they are potentially so useful and what some of the challenges with them are. I do think there's some value to be provided there if someone can get it right and the organization running such a scheme is operating in a transparent and above board manner.

Unfortunately though we have a number frauds in the "stablecoin" space. And I mean frauds of the very deliberate criminal nature, many coins/tokens/etc have been set up by organizations who have made no actual attempt to deliver any value. It's very easy to maintain the ability to redeem tokens when everything is booming and all the assets are appreciating, however when there are drops in the market the governance and financial structures of these schemes get tested and many fail outright. Aside from outright rug-pulls another common failure mode is for the currency peg or other financial guarantees to fail. For any currency peg to work there needs to be a sufficient amount of currency reserves behind them such that people can redeem the tokens for the currency when requested. This is the bit that's dubious or outright fraudulent with many stablecoin schemes. Having enough currency reserves is absolutely necessary to reliably maintain a peg to another currency, and its this factor that will cause so many problems, especially in a bear market where assets get devalued.

For example lets say we invent a token that's supposed to be one-one matched with a US dollar. To do this safely we would need to have in reserves one US dollar for each token in circulation. These reserves also need to be sufficiently liquid, if you can't sell the assets then you can't raise the case to handle the token redemptions. If there's not enough reserves to match the tokens in the advertised ratio there's a number of ways that the situation could unfold. One potential resolution would be to trade the token at less than face value or have a situation where eventually there's no reserves to back the redemption of the token.

Many of the fraudulent schemes have less collateral than needed and the plan is just to have them go under in the case where there's enough of a drawdown. Another issue is that many of the reserves on the books simply don't have the liquidity, in the case of having to sell them it might move the market for those assets, hence decreasing the value that could be redeemed in the process of liquidating them to maintain the currency peg.

Interestingly it was the acquisition of highly risky investments that was in large part responsible for the failure of Bear Stearns, specifically exposure to sub prime mortgages caused an enormous amount of pain when the market for them collapsed. All of a sudden what looked to be a large number of assets on the books turned out to be the high risk investment that people in the know knew it to be. The bad accounting and financial games did fool a lot of people though, and due to times being good people wanted to be fooled, there was too much money to be made so people deluded themselves into thinking the risks weren't so high. We see this same psychology right now in crypto and many people are going to wipe themselves out as a result. We see some very scary parallels with the situation with Evergrande, assets that can only have value in the presence of ever expanding real estate asset bubbles carry enormous amounts of longer term risk. The failure of massive firms like Evergrande to pay its debts is a early dominos falling in a credit contagion chain reaction. But yet many organizations have large amounts of exposure to such asset classes, if only indirectly due to the nasty way in which credit contagion spreads.

In a bizarre case of history repeating itself we see a connection between these crypto currencies and crappy investments. At one point people were wondering if Tether has exposure to commercial real estate paper including the troubled Evergrande. But more importantly on a macro level drawdowns in commercial real estate tend to drop prices for a large number of other assets. Seems nobody really is paying any attention though. Given the huge write down in the value of assets in this latest market crash there must be an associated write down in the value of the collateral available for backing a peg. Unfortunately many stablecoins have more exposure to bad assets than is prudent and that causes systemic risk. But this write down hasn't happened with the actual books for many stablecoin organizations which creates a dynamic where insolvency will hit if there's a sufficient number of redemptions for USD. Eventually there will be more tokens than there are USD, which means that if redemptions keep occurring at a one-to-one exchange rate the people who attempt to redeem last will get nothing.

I think the big failure will be the inevitable failure of Tether. It seems beyond doubt that the collateral for Tether is insufficient to cover withdrawals and the accounting is dubious at best and maybe entirely fraudulent at worst. For a long time now Tether has resisted a proper audit into their collateral, which in itself is not a good sign considering just how large the system is. Problems with the auditing have been known for years now, but yet I'm sure when it blows up tons of people will say "there's no way we could have seen this coming". Which just like the situation in subprime/GFC and the situation with LUNA is a combination of delusion, laziness and intellectual corruption coming together in a storm of post-hoc rationalizations. Anyone who actually did any due diligence and wasn't completely blinded by wanton greed could see the risks fairly clearly. As I mentioned in my article Why do stable coins matter published in October 2021 it was already known at that time from documents released by Tethers lawyers that they could only guarantee at most 74% of their reserves.

But it gets even worse lately. Here's an example of some documents from the auditing of Tether: 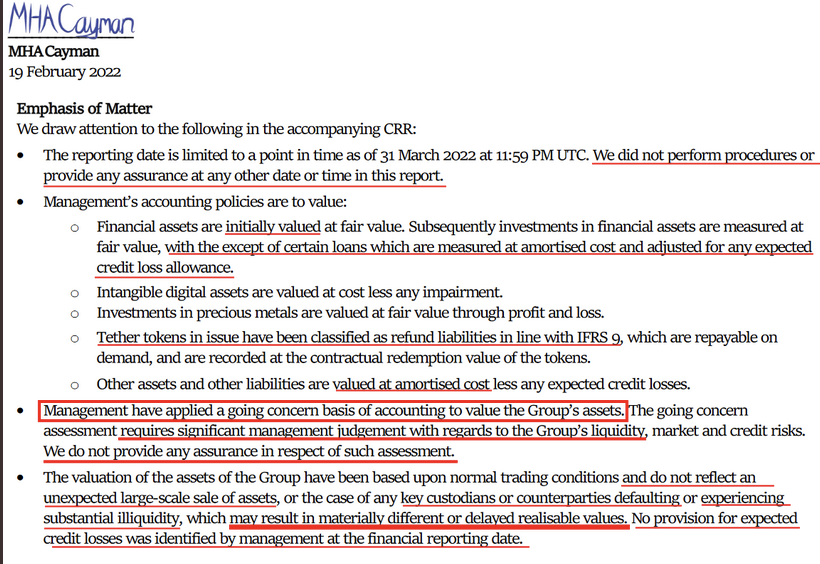 This is just outstanding. Now that this is out there in the open nobody should have the excuse of "we couldn't possibly see this coming". In their own words they are admitting here that they don't have enough collateral. Perhaps it comes as no surprise that billions of dollars of tokens have been dropping off lately:

The broader implications for the crypto market with this are large. Many transactions are currently taking place under the assumption that one USDT equals one USD. But really this just isn't going to hold for much longer. The billions of dollars of assets in Tether will have to therefore be devalued at some point which is going to cause many organizations a huge amount of pain.