Recently with the huge spread of the Omicron variant of Covid we are seeing a variety of impacts from such a massively contagious virus spreading around the community. We are starting to see a variety of disruptions from the huge number of people isolating while recovering from the virus. Even though most people recover far faster with this strain of the virus than all the previous ones the huge transmissibility means that a lot of people are getting exposed to this in a small amount of time. 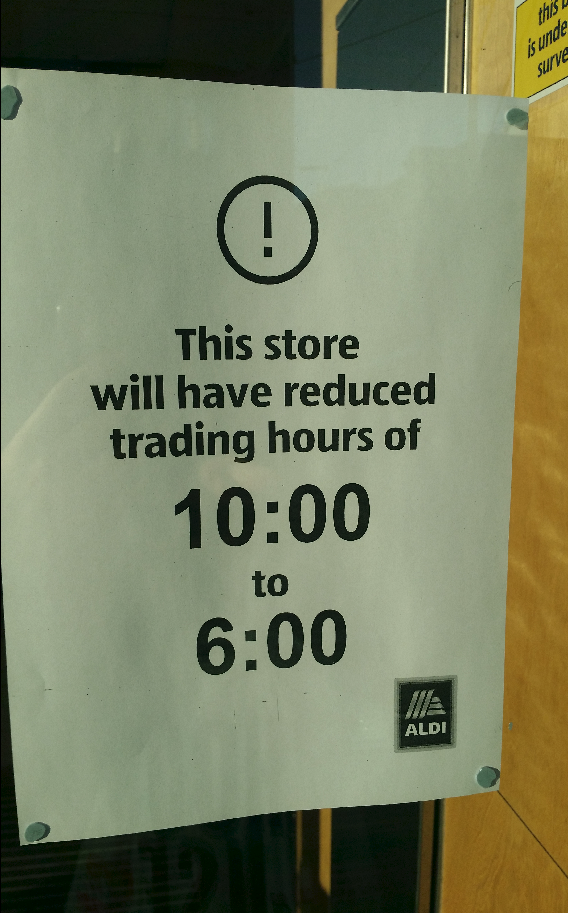 I overheard a very interesting discussion with a small business owner the other day about the changes in Covid regulations with regards to businesses and the impacts of the newest Omicron variant.

Before getting into how this is impacting businesses I think it's good to go over some of the health data, initial data (as of Jan 2022) shows that the Omicron variant of Covid is far more transmissible while being far less deadly than earlier variants. This is mostly due to the virus being in the upper respiratory tract rather than the lower so the severe acute respiratory problems are less common. This change however makes the virus far more transmissible than even the fast moving Delta variant and is one of the fastes moving viruses we have ever seen. The Omicron variant is so transmissible that an elimination strategy is effectively impossible without completely shutting down society. Even with shuting down everything via draconian means may not work at stopping the spread, not to mention the huge collateral damage that would cause. Because of this it's spreading like crazy worldwide at the moment (we will see what happens with China as they appear to be attempting to stop the spread, how successful they are will be interesting to look back on). The other very important point is that Omicron is rapidly replacing the previous variants because it spreads faster than them but also infection from Omicron provides substantial immunity to the other more deadly Covid variants. Delta is rapidly disappearing from the community with the overwhelming majority of cases already being Omicron. At this point I know multiple people who have been positive for Omicron and a lot of them have very mild symptoms and some have been completely asymptomatic. For example someone I know had a test before getting on a flight and came back positive, he had no symptoms at all. 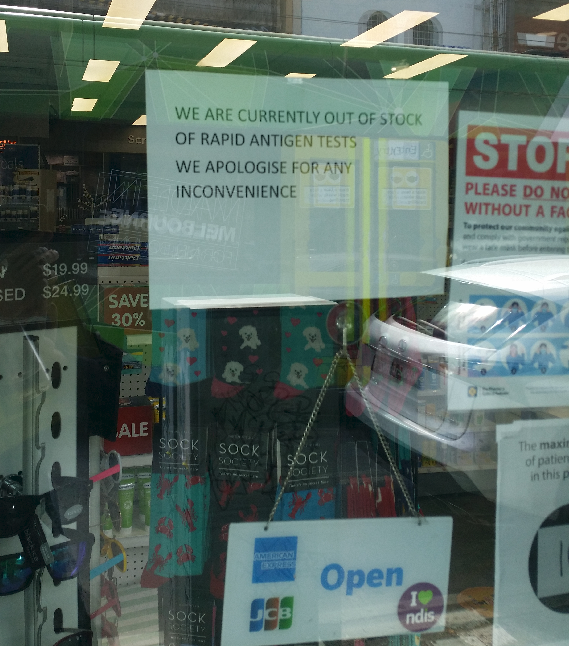 I started seeing shortages of rapid testing kits brewing a couple of weeks ago but this week it's become common knowledge that these kits are very hard to procure. Because there's a national shortage of testing capacity many more people will have had Omicron without getting tested because there's no longer enough testing capacity to test everyone.

So coming back to that local small business owner, he was telling me he had to talk to his accountant in the very early stages of Omicron to assess if it was financially feasible to remain open if the existing Covid regulations were to continue to remain in force. One regulation that came up in that discussion was the requirement to "deep clean" the building after having a confirmed case before being allowed to reopen. This apparently came at around a cost of around $10 per square meter (around $1 per square foot). Given he has a floor space at the business of at least 500 square meters this means he would have had to spend $5000 on a deep clean according to these older rules. Given that cases were almost inevitable this rule effectively would have meant it was more profitable to shut the doors to the business preemptively rather than in response to a case from a customer. Due to the rapid spread of Omicron a closure from getting a positive case would have been inevitable and sooner rather than later. Even if you closed in response to a case and had a deep clean chances are you would reopen to just get more cases again and have to close again. A preemptive closure could be quite prolonged in such a situation as omicron case numbers will be high for at least the next couple of months. The other part is somewhat non-financial, the logistics of getting a building deep cleaned have shifted enormously, with this many cases it's just not possible to get every building deep cleaned in a fast amount of time. Many businesses are now closing due to massive staff shortages due to people isolating after catching the virus, time will tell what happens next. 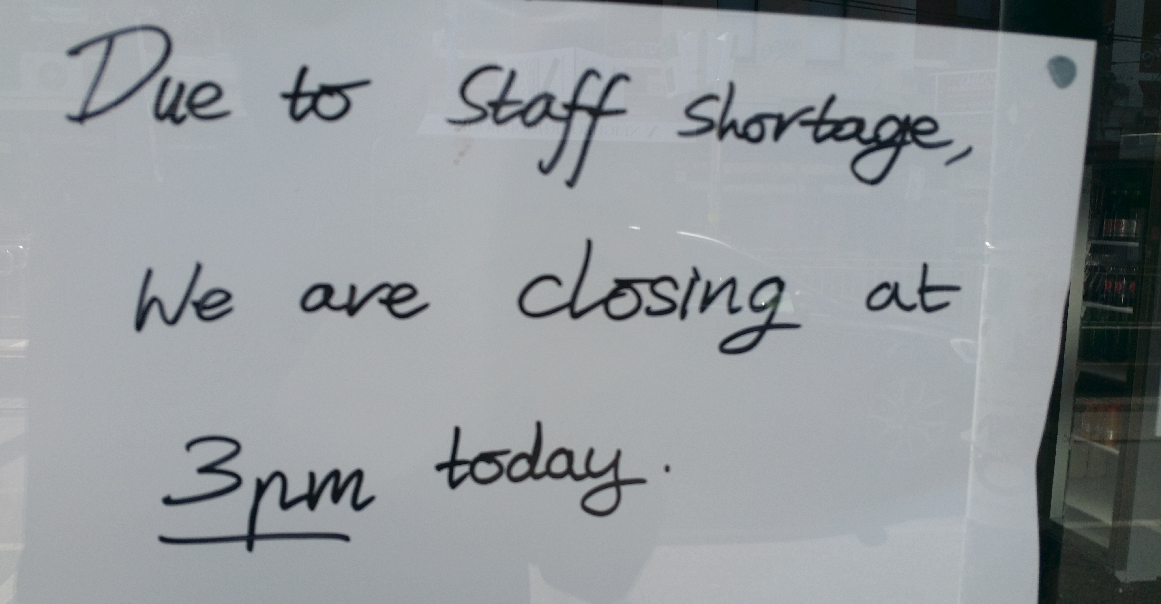 Back when there was less transmissibility and much bigger consequences for infections this sort of deep cleaning regulation was better when looking at it from a cost benefit analysis point of view. More importantly though it was feasible to implement this policy without causing extreme levels of building closures as there were few enough cases such that the buildings themselves could have been cleaned in a reasonable amount of time. Part of this was because during the worst of the delta wave we had lockdowns and closures of non essentials. Now with something like Omicron ripping though it's likely not logistically feasible to actually deep clean all the buildings in any sort of reasonable time frame, there's just not enough people who have the skills and equipment available to go do that cleaning.

At this stage in the pandemic some of the older standards will become logistically infeasible to continue with. But what happens when logistical impossibility from a change in circumstances collides with political positions that are impossible to easily back down from?

Creating policy to deal with a pandemic like this is obviously a very hard task, there's the public health situation that needs to be contended with, a situation that at least initially was difficult due to a lack of data. Even if the science of the virus and the health response is settled, there's a number of other factors that good policy must address like ensuring that the systems of governance keep operating properly and that the economy is not unduly damaged by the response. This is no easy task especially when you consider that that pandemic is a highly dynamic situation and new information comes up on a regular basis. There is a propensity of many in the political sphere and media to opportunistically attack people who change their policy directions which forms a bit of an incentive in itself to stick to outdated policy to appear to not be changing course too often. This is of course troubling when we have different variants that pop up from time to time that drastically change the underlying situation. Also there are a large number of people who are not keeping up to date with developments in the pandemic but dogmatically consider themselves as being highly informed, or worse consider themselves as being on top of the scientific development without actually understanding anything at all about science1. This is a dangerous group of people at the best of times but has seen it's numbers grow hugely due to the pandemic. I think this will be an important dynamic to follow because there are older regulations from earlier on in the pandemic when the situation was vastly different that many people became literally hypnotically attached to which might make it very hard psychologically and politically for people to adapt to the current situation as the newer data comes out. There will no doubt be people who double down on bad policy but there will also be people who see the new data from the new variant and will adjust accordingly. As much as everyone is badly fatigued from all the changes that have happened I think that on a policy front it's more important than ever for decision makers to be making policy based on the current situation and not the situation that existed months ago. All I can say is that I hope this is the last wave of all this and the early data seems very positive on this front as Omicron is displacing the other more deadly variants.