Some days I seem to pay a lot more attention to the prices of things and other days I don't. Back when I was younger and prices were more stable I didn't really pay much attention at all to the fluctuation of prices. Maybe that was a result of the lesser volatility or perhaps more a result of my immaturity. I was on my way to a writers group in July so perhaps my mind was primed to pay a lot more attention to world, subconsciously perhaps I was tuned into what I might write about. As with all events part of the experience of them is the process of actually getting there. And getting there was more expensive than any other time I've been alive.

My first vivid memory of prices inflating was when petrol went above $1/liter for the first time. The reason I remember this was that many places didn't have signage at the time that could accommodate the extra digit. For so long petrol was at prices lower than $1 that the signage didn't have the extra digit. There were a number of workarounds that were employed in the interim. These sort of workarounds still stick in my memory. This was an era before smartphones and digital cameras so it's harder to find pictures of this than the most recent price movements. 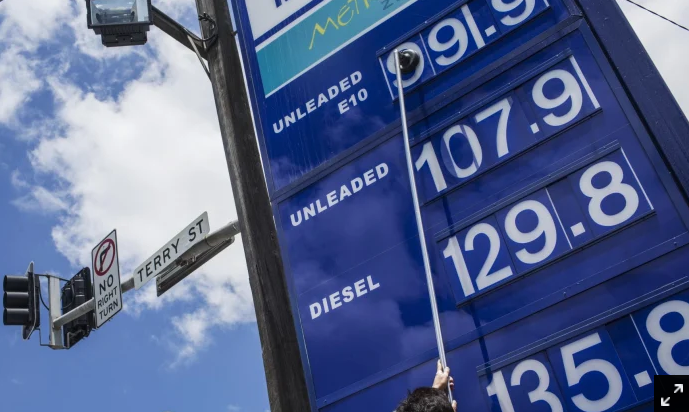 You can see in this picture how there's a fixed width for the panels that have the digits but the amounts higher than 9 have had to be squished a bit to fit. This was workable because the digit 1 is narrow. Before this would have become infeasible due to the wide nature of the digit 2 there was a widespread shift towards electronic signage, which should work till $10/liter fuel at least and who knows how long that will take, but on the current trajectory it will happen and will happen within our lifetimes. Now all these signs are electronic and the prices for fuel are tightly controlled by a central office.

It would take a pandemic with an especially heavy handed lockdown to destroy enough demand to get prices back below $1/liter again. This was remarkable because $1 just doesn't buy anywhere near as much as it did 20 years ago. In real terms this was the cheapest fuel had been in decades. It didn't take long for fuel to be back at record high prices in nominal terms after people were freed from being imprisoned in their homes and with current world geopolitics it doesn't look like the prices will let up anytime soon barring a catastrophic economic collapse that somehow kills demand for fuel without also killing supply.

Part of what made petrol going over $1/liter the first time so noticeable was the workarounds with the signage, this was in a time before electronic signage was widespread, an era when you actually had to walk inside to pay for your fuel. What made the $1/liter fuel milestone memorable to me were the discussions and emotions of the time. This psychological threshold being crossed caused a moment where people had to think about how things had changed, discussion about how much more expensive everything else was came up at the time, I remember people first talking about the changes to "minimum chips" orders first coming up then. People started to construct indexes much like the "Big Mac" index where they'd go through their memories to remember what things cost in the past to then compare them to the present. For example when the train stations changed their signs a few years back it was very memorable for a short period but now that the novelty is gone that has been almost entirely forgotten. But the changes with the cost of fuel were far more than cosmetic, people instinctively know on some level that fuel is very important even if they can't put it into words or numbers exactly why. We make large life choices like choosing jobs based on things like the cost of travel or choosing where we live based on transport options.

The destruction of the purchasing power of the local currency has run on badly for many years but it has been a silent process for the most part. These loud examples of things breaking down due to inflation are some of the only things that are truly memorable in an otherwise slow brutal grind where the purchasing power of the average citizen has been systematically destroyed. For something like oil you can clearly see that it's got a lot more expensive in dollar terms over the years, but at least for me I usually don't get any particularly vivid memories from charts1, my vivid memories are moments that caused me to reflect on how much more expensive things had got. This is part of the insidious nature of currency debasement and inflation, when its done slowly it's like the proverbial boiled frog, it slowly kills people's savings without alerting them to other options that could potentially save them. Because it happens gradually people get their savings destroyed without even noticing it. It's when big changes happen in short periods of time that people start to think about things that they'd otherwise take for granted.

One thing that many people took for granted was the ability to go to events. Now that things have been reopening there's much more in the way of events to go to, which plays a part in the the demand destruction for fuel going away. People are travelling around more and travelling takes energy. A definite sense of change of energy had come across society in many ways, not only could people travel they actually wanted to. The endless fear mongering about how dangerous the world was supposed to be seemed to not have such a hold on people and people just wanted to do normal people things like meet other people again.

My journey to the city to meet other like minded people was getting closer to an end when I'd arrived at Southern Cross train station. The wavy roof that was completed in 2005 has always trapping the fumes of diesel from the trains running underneath it which forms part of the unique feel of the location. The smell of these fumes reminded me of the experience of smelling the fumes the last few times I'd been at petrol stations. Something I'd seen a number of times recently that bothered me was that diesel prices were higher than petrol prices. The reason this bothers me is because many very important things that people never think about, like those trains, run on diesel. A huge amount of the modern economy requires diesel fuel in order to operate but most often this happens in the background. The logistics of the modern economy are complicated and for the most part people never think about it until something goes wrong like toilet paper running out.

It can be easy to forget how easy it is to take pictures today compared to before. Trying to find photos of the old prices was hard, but the recent ones I didn't need to look further than my own phone. Almost everyone seems to have a smart phone these days, including a lot of homeless people. But more about how homeless people have access to incredibly sophisticated technology with smartphones but not access to basic housing in a future post.

The reason I was at the train station was to try to find some sort of snack to eat before the event. I'd first gone past this burger place, which ominously had a sign saying that there was a national shortage of lettuce so they couldn't put it into the burgers. This is the nasty side of inflation and supply chain disruptions, when things go beyond expensive and start to get so bad that you can't get what you want at all at any cost because it's just not available.

So I walked on, with my demand for burgers being disrupted. I next walked past a sushi place where they had some end of the day deal where you could get 4 rolls of sushi for $10.80. I wasn't that hungry so I just ordered 2 rolls, the person at the counter then says "That will be $12". I asked if there was 4 rolls for $10.80 as per the sign and there was a confused look before they said yes. I ended up getting 2 extra rolls and $1.20 back. The amount of energy per dollar in this food was much higher than the lettuce but yet the lettuce was unavailable for any cost. I'd noticed this situation in the past a few times, calories in the modern world have got very cheap but sometimes more nutritious food is just not available at all, in some senses the modern world solved the problem of calory availability but not nutrition availability, no wonder we have so many chronic health problems these days. As I was buying the extra two rolls for -$1.20 they mindlessly tapped some numbers into an electronic point of sale device while I was still obviously holding the cash in my hand to pay. For further confusion I actually payed with the cash that I had in my hand the whole time, but first I had to tap the terminal screen with the $10 note such was the vegetative state of the person behind the counter. I'd said I was paying for cash but for some reason these words never processed with them and the muscle memory of entering numbers into the point of sale terminal kicked in, it was only when they looked at the terminal and didn't see a transaction that they paused to think. The pandemic of mindless cashless payments continues. This non-monotonicity of prices would have been regarded as completely crazy in just about any other era, but now it's become disturbingly normalized, but more about that in another post if I get around to it.

When I finally got to the venue there was another much larger meetup event running at the same time, a professional meetup. I actually had been to the other event before but this was the first time it had run since before the pandemic. The venue was extremely busy, I couldn't help but feel some sort of roaring 1920s feel to it, people seemed keen to party and enjoy these events. You could tell people were happy to be back at events that had been gone for a couple of years and while they were there they weren't thinking about the outside world. Like the other people at the event I was just happy to be there, the other people at the event were fabulous and it was a great time. I was so happy and engaged with the people that I took no notice of the price of anything there.