Given that the climbing project is documenting a man made wall I thought it would be interesting to find out a bit more about why this was built in the first place. The reason is trams, if you are interested in history read on if not the next entry in this series is here.

In the earlier 1800s Northcote was mostly empty land and farms, the massive expansion of Melbourne was yet to happen. In 1842 High street was created as a government road running north through Rucker's Hill. In the 1840s and 1850s Gold was found in many place in Australia, this eventually led to the Australian Gold Rush. While there's no gold in Melbourne, a lot was found around Melbourne. Settlers including some of my distant relatives arrived in Melbourne around that time via the a port during the time when the city was experiencing a boom of settlement in the 1800s.

In the early days of european settlement Northcote was disconnected from the rest of Melbourne with the main settlement being on the top of Rucker's Hill. This is quite the contrast to 2020 where Northcote is a suburb of Melbourne surrounded by other residential suburbs in all directions.

The period from 1883 to 1889 was extremely prosperous for the city of Melbourne and led to an boom in real estate and land prices with a substantial amount of speculation. In the early days the settlement of Northcote was mostly centered on Rucker's hill, the current location of the town hall. As is the case today having good transportation is a huge aspect of driving up land prices. A common strategy for new rail development is for the rail company to buy land near the places they are building the stations since the appreciation in land value then allows funding for the construction works.

The stone bridge that the tram route now uses to cross the creek was built in 1875 (note for the climbers reading this, it's not great for climbing). But the original bridge didn't carry trams initially, more about that in a bit.

1880s Melbourne with a massive land speculation boom had a lot of people wanting to invest in land, so creating better transportation for people to get from the city to the land was important. Keep in mind this is an era before the automobile came to such prominence, early urban planners who favored highways and cars like the infamous Robert Mozes weren't even born at the time (he was born in 1888). So the pressures of the time for transportation were met with the options of the time, mostly trams and trains. Against this backdrop Melbourne layed out an extensive tram and train network, these same tram services have been in continuous operation since 1885 and remain an iconic part of Melbourne city. In the early days these Trams were horse driven or cable driven, electrification came about later. Even though the first power station in Melbourne was installed in 1892 at Spenser Street the electrification of the tram lines came about much later. The story of the tram route in Northcote is notable for a few reasons, one of which is that it was a private venture that was not connected to the rest of the tram network in Melbourne. The city tram route terminated at Clifton Hill just before Merri Creek on the city side of the creek.

In 1888-1890 the tram route (which is the 86 route today) was extended up Rucker's Hill, this required a huge ramp to be built because the gradient of the slope of the hill is too steep otherwise for trams. You can still get a sense of this gradient today by looking east and west from the top of Rucker's Hill, there's also a side street called Jackson street where you get a sense of just how steep the hill was before the ramp was put in. In a moment of stupidity as a kid I attempted to go down the hill on a skateboard and ended up building up a lot of momentum quickly followed by falling which ended up with me going to hospital. The hill has been known to be very steep for a long time, in 1859 a fatality occurred from a cart breaking on the steep hill and no doubt the momentum was a big factor. In order to enable the tram route to extend to upper Northcote an embankment ramp was built with bluestone blocks and filled with earth. This also made it far easier for the increasing amount of traffic due to the growth of Northcote and Preston to travel along the route. The bluestone retaining wall for this ramp forms the climbing wall that I've been documenting in this series of blog posts.

Connecting the tram route to the city required widening the bridge over Merri creek so that it could handle the tram traffic. This was carried out in 1890, here's a photo of it from 1892: 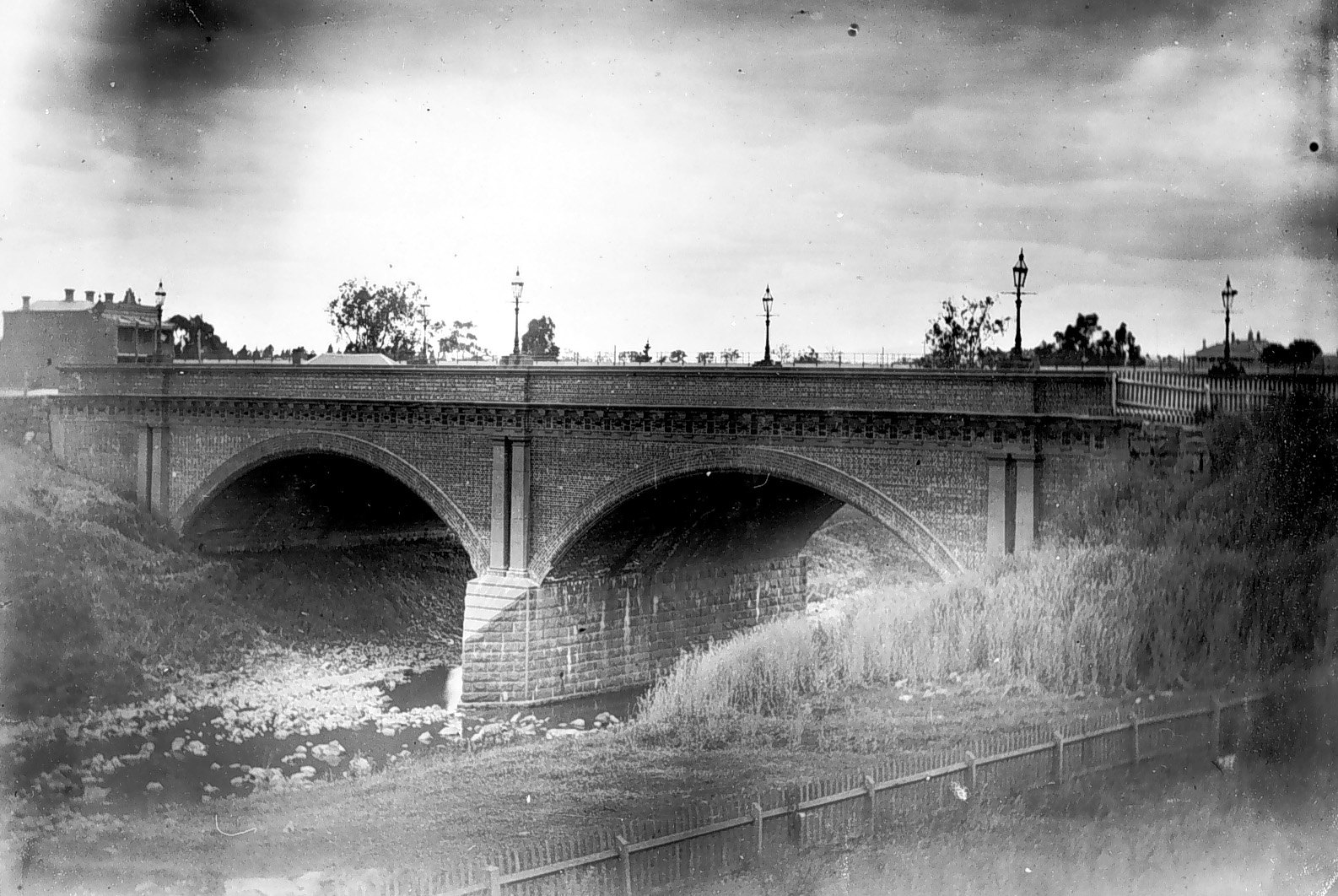 You'll notice that there's no overhead wires! And that the lighting on the bridge are gas lamps. You can still see where the older lighting was installed on the ramp as there's stone blocks with 4 bolt holes but nothing attached.

So if you have been to Northcote via tram now you have a bit more of the history of the means of transport that got you there.