Today I was at a restaurant and unfortunately it was the second time in a row where there was minimal service and a bunch of QR codes that looked hastily stuck on the tables for the patrons to order their food. There's a number of reasons I dislike this but for starters I actually had a question about what was in a dish and I wasn't so easily able to strike up a conversation to decide what I wanted to order, already I'm having a worse experience than I would have had just a few years prior and I haven't even talked to anyone yet.

For some time now this "innovation" of having less service at restaurants has bothered me. Despite strictly avoiding McDonalds for over two decades now I still remember hearing about how they were the vanguard in removing staff in favor of technology for ordering. Perhaps a dehumanizing thing like this isn't so surprising considering the firm in question, but it was something that I found bothersome because I knew it would spread. In part I dislike this spreading to restaurants because it removes jobs but also because if I wanted to serve myself I'd make food at home or go to some sort of fast food place (that's not McDonalds). Going to a restaurant to get the "uber eats"/app like service is exactly what I don't want if I'm paying to go somewhere fancy. Interestingly enough many of these delivery apps companies are now going broke, perhaps the novelty is wearing off, or maybe just the infinite amounts of cheap debt has worn off. But something where I think the novelty is likely never going to wear off is just getting good old fashioned good service at a restaurant.

I might write about the economics of this more at another time but there was something cultural I noticed at these last two restaurant experiences that I think is far more important. I have been on a no-phone while eating experiment lately. I've been eating more healthily because I have serious fitness goals and I've noticed that some of the good habits start to make me think carefully about other habits I have. The other day I was talking to people about their phone habits, which really are just addictions for many people, and I remember being met with surprise that I have almost no apps on my phone and that I try to use my phone as little as possible. I can see where such misconceptions about my tech usage could come from (and hence create surprised states), people might assume that because I'm a prolific creator in tech that I therefore must be a large consumer of these tech products. This couldn't be further from the truth when it comes to many of the main platforms that people tend to bring up. Ironically part of what allows me to be so productive is my abstinence from the mental-fast-food that is much of social media, not being an addict to these platforms has the obvious benefit of saving large amounts of time but has a number of far less obvious benefits that have only become more apparent to me recently. Many of these main platforms are really just attention economy based systems where you as the user are not the customer, so the experience is not set up for your benefit and any benefit you get is somewhat tangential to the companies goals. For sites like the majority of the household name social media sites the customers are the advertising companies and not the end users. As a result of this and the inevitable temptations to make more money the social media sites have started to become more and more user hostile in the pursuit of making more from their customers. Much of this manifests in those sites attempting to capture the attention of their users at any costs, which in practice unfortunately is something that comes at a high cost to users.

The most insidious part of this new "attention economy" is that the upper limit of growth from getting more users on to these platforms has been hit. For some time the growth on these platforms could be sustained by new users, people who'd never been on social media coming online for the first time, and with the massive growth of the internet the numbers were large. But now even homeless people have smartphones and it has become rare to meet anyone who isn't on social media. So for a company in such a situation how can profit growth be sustained? It seems that without the organic userbase growing it will be harder to maintain the same growth figures as before. Wall Street is perhaps the cruelest mistress of all and missing earning figures like as happened with Meta lately will not be received well regardless of the reasons why. Unfortunately what I think has happened to some degree is that due to the space being saturated an increasingly zero-sum mindset has been adopted by many of the organizations creating these products to try to "capture" their user base.

I had a chance to think about all these concepts because I wasn't on my phone and therefore wasn't distracted. I was just sitting back and eating some food while watching everyone else on their phones. My subconscious was freed up from the inane distractions of "notifications" notifying me of nothing important and was allowed to really work clearly on the problems. I had gone for a walk around some of the places near where I used to work which prompted many thoughts, while sitting and having dinner I found I was digesting those ideas as much as I was my food. By not having the phone as a background distraction I was able to enjoy my food much more and avoid what I like to call "information indigestion". I might write more about how different states of motion and immobility have on the writing process in a future article, there's far more to this than many people think.

Unfortunately I think one of the biggest downsides to the QR code based ordering systems is that it gets people using their phones at one of the times where they'd really be better off putting the phones away. I couldn't help but remember a photo I saw some time ago of a restaurant that gave discounts for putting the phones away during the meal. On each of the tables there was this small cage that you could put the phones into and if you left them there for the whole meal you got a percentage off. At the time I thought this was brilliant, since putting the phone into the cage was much like removing the mind from one. Some of the photos from that place were just incredible. These days I think many people are in a far more addicted state however and this "cold turkey" approach might be a bit more than some patrons could handle if they weren't already cutting back on their phone usage.

Given the state of active and extreme addiction that many people now have with their devices I can't help by feel sad by seeing a user experience that sets people up to be on their phones and not engaging with the atmosphere of the restaurant. When a customer leaves will the remember the restaurant and it's (hopefully) carefully crafted culinary experience or will they remember the latest bit of "outrage porn" that was fed to them via social media via an intrusive notification cleverly crafted to derail and thus steal their attention. I was also slightly shocked at just how much mindless mobile phone use there is overall after the ordering process, many people seemed to be primed by the ordering process to have psychological proximity with the phone usage and the restaurant experience, at one point I remember more than three quarters of the patrons on their phones, with one whole table just looking at their phones and not talking to each other. When you stop using your phone reflexively it becomes hard to not be confronted by just how much the average person is mindlessly on their phone.

All of this non phone use has been great and has got me brainstorming more ways to use my phone less. One of the ways I was using my phone was to use it as a stopwatch. This was useful for some things like parts of my exercise regime, hard to really be interacting with your phone while doing cardio or hangboarding or weights or something, so using it to keep time is of little risk. But in a setting where concentration is either essential or makes the process more enjoyable in some way it is great to put the phone away. Putting the phone away is something that benefits from planning in advance for, since phones are so convenient the temptation to use them is often strong. Along these lines I bought some sand glasses: 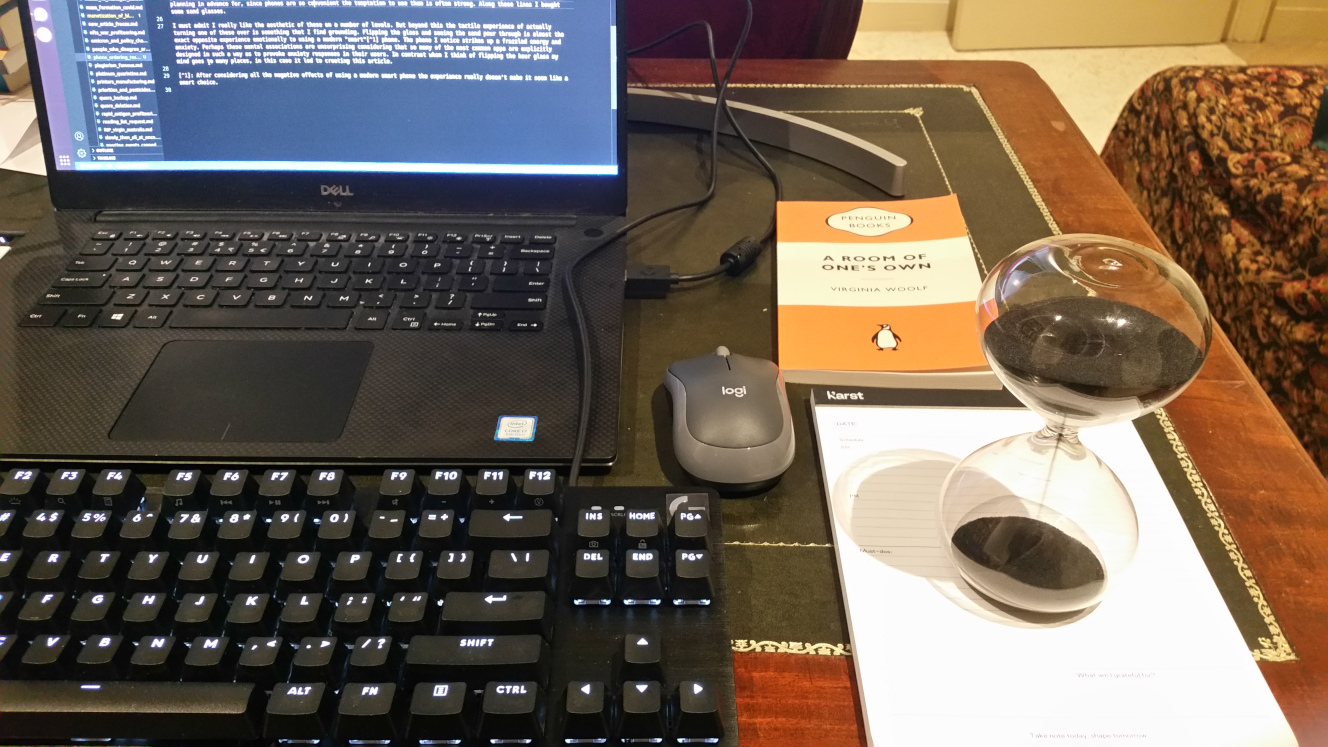 I must admit I really like the aesthetic of these on a number of levels. But beyond the looks the tactile experience of actually turning one of these over is something that I find grounding. Flipping the glass and seeing the sand pour through is almost the exact opposite experience emotionally to using a modern "smart"1 phone. The phone I notice strikes up a frazzled energy and anxiety. These create a calmness and focus. Perhaps these mental associations are unsurprising considering that so many of the most common apps are explicitly designed in such a way as to provoke anxiety responses in their users. In contrast when I think of flipping the hour glass my mind goes to many places, in this case it led to creating this article.