I tend to avoid watching TV for a variety of reasons, but I was reminded of one of the main ones just before. That annoying advertisement where Matt Damon is promoting cryptocurrencies just came on the television, thankfully I hadn't seen it in a while so my annoyance was a one off and hopefully I won't have to endure it again. Now that the price bitcoin is going in is looking less like this and more like this that advertisement seems even more bizarre.

I have to say all that talk about how "fortune favors the brave" is especially annoying in this context. Bravery without due diligence can. and frequently does in crypto, ruin people and there's a whole very mature ecosystem of scams in crypto that exist just to take the money of suckers with no real plans of delivering any value. In other financial services areas these would likely be illegal but I guess that's the wild west sort of situation in the crypto world. Unfortunately I just feel a lot of people are going to get ruined by the drawdown in crypto happening at the moment because crypto drawdowns are far worse than people expect. In case you missed it, this is what the bitcoin price has looked like lately: 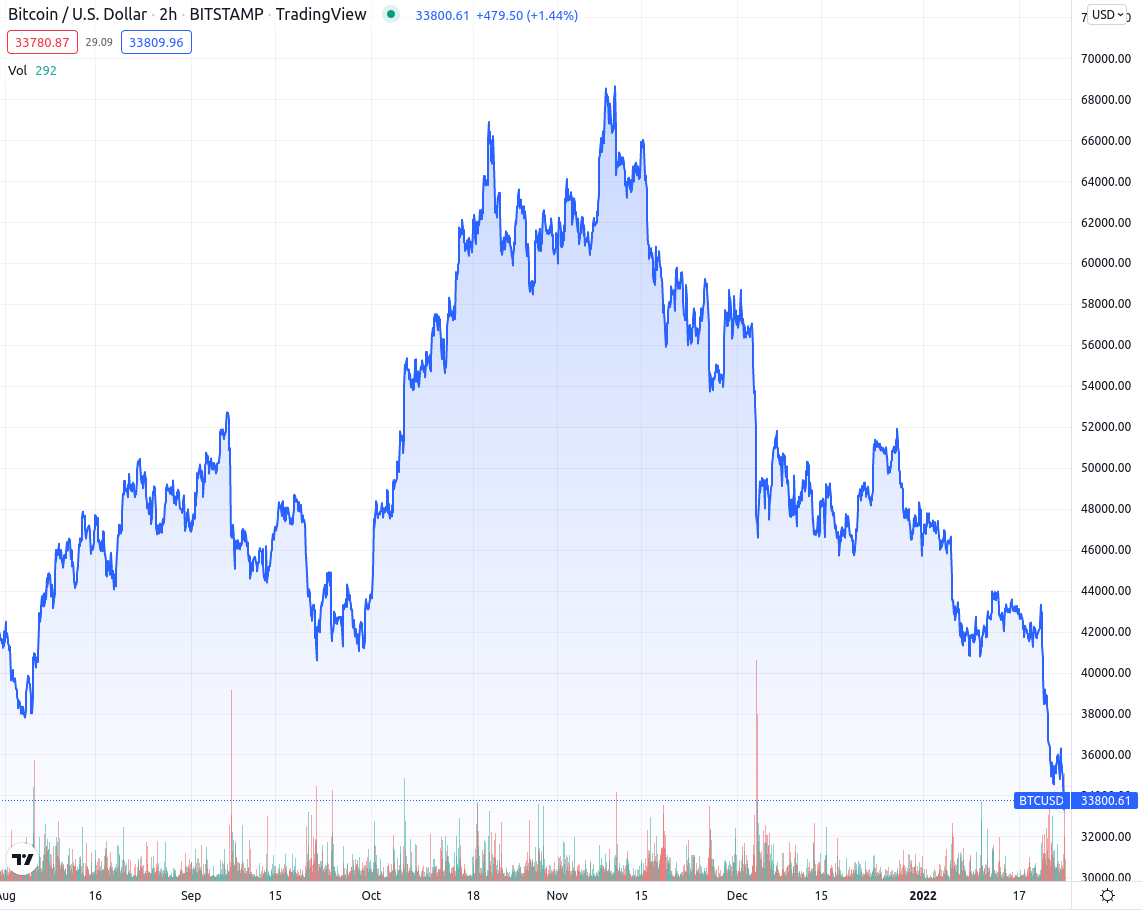 I had a LOT of people come out of nowhere to tell me to invest in crypto at the peak. I even had people telling me how they were investing in crypto on leverage, which is mostly going to be a stupid idea for most people1. Unfortunately the leverage people were taking on in the crypto space was just unreal, I don't think I'd have believed it if I hadn't seen it. It was remarkable how many people who otherwise were not interested at all in the space come out of nowhere and were buying the top and telling everyone else to buy the top. When the prices started to slide I noticed the comments mostly disappeared, I stopped hearing this in casual conversations and even on social media the amount of comments dropped off too.

The thing I find annoying about this specific advertising campaign, aside from the references to space to subtly promote the idea of the moonshot possibility to inspire greed, is trying to make this comparison that people who are new to the crypto space now are to be compared with the actual pioneers in other areas. This is bullshit because crypto is not new enough to really make a sensible comparison with these other actual ground breaking people without being extremely disrespectful to those people who were actually pioneers in other areas. Maybe if this ad was like 8-9 years ago sure, but it's not. In any case this level of annoyance due to annoying advertisements is exactly why I don't watch TV.