The other day I wrote this post about the huge FOMO + retail investment bubble that hit Eastman Kodak. This stock had an absurdly fast rise followed by a fast crash. The only reason things didn't happen quicker is because more time was spent waiting due to circuit breakers than trading. Kodak stocks triggers 20 circuit breakers on the markets in a single day of trading. Even after the somewhat normalization from the FOMO peak the stock is still up enormously this week: 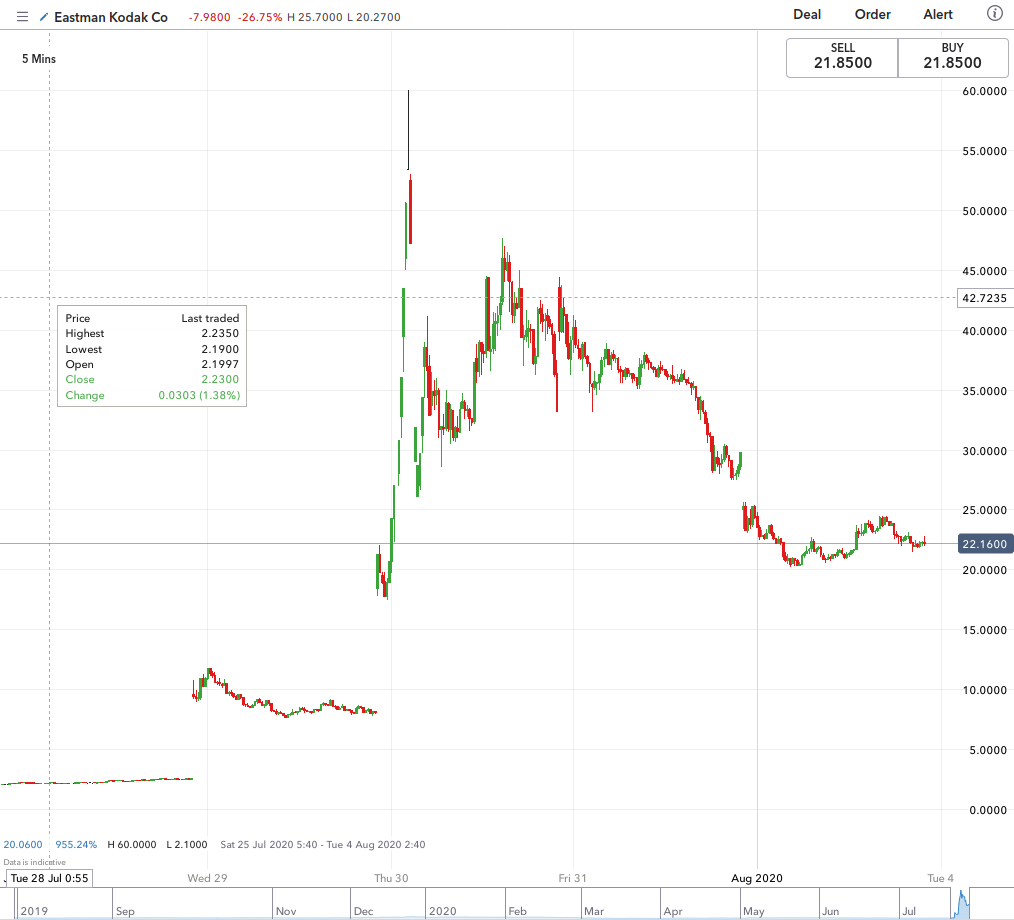 It struck me that there was something I had to learn here but I wasn't sure exactly what. Initial searching led me to find out about the stonks meme so that was definitely something I needed to learn about! But more seriously I realized there were big missing pieces of knowledge I have about the retail investment markets. Obviously the power of retail investors to pump money into a single stock in the age of huge stimulus is quite a sight to see. But it struck me that there was far more to the situation than just this.

I did come across more details about Payment for order flow (PFOF) which immediately seemed like a missing piece. Data shows that during this spike a huge number of investors from Robinhood piled into Kodak stocks. But how does Robinhood as a platform make money? It's a bit of a long post but how brokerages make money is worth reading if you'd like a deeper understanding.

It turns out that Citadel pays Robinhood for getting the data about their retail trades first. This means that users on Robinhood are partly paying for their trades by having the data of their trades sold to high frequency trading firms. In this situation I knew that a bubble was forming and I had planned to first go long then go short on Kodak in anticipation of the boom/bust that was coming but there's no way I could have timed such a position right because I simply didn't have the data available to me fast enough to make this decision. Clearly that information is very valuable, and that's what people are paying for. All the people on Robinhood trying to time the market on this trade would have been at a large disadvantage here. Additionally I'm sure if you had really fast access to the order flows you could accentuate the momentum of the retail investors then sell off the positions to leave someone else holding the bag. I suspect that significant amounts of institutional money moved during this trade due to the bubble forming being so painfully obvious. If I was running a high frequency trading operation I'd certainly want this information in case I could act on it profitably.

As is always the case with the markets the money speaks far louder than the words. I'm not sure I'd go so far to say that "payment for order flow should be illegal" but I certainly do think these retail traders should about know how the platforms they use make their money.