Lately there's been a lot of photos of the "Evergreen" ship being stuck in the Suez Canal. At the time of writing it's been stuck for 4 days. 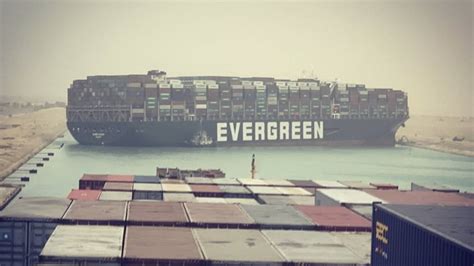 I think part of the reason we are seeing pictures like this everywhere is because it's quite the photo opportunity, the Suez Canal is quite wide, it's just that these ships are enormous and are longer than the Suez is wide. (The Ever Given is 399.9 meters long1)

The other point of interest is that a huge amount of global shipping transits through the Suez Canal. Ever since the invention of the standardized shipping container the modern world has built up an enormous dependency on container shipping. Huge amounts of goods now get shipped around the world in these containers, a lot of which goes through a few major waterways, the Suez Canal and the Panama Canal being two very prominent examples.

Because of the geography of the seas the Suez Canal was dug to make shipping much quicker especially between Europe and Asia by avoiding the need to circumnavigate to the south of Africa. A huge amount of shipping containers transits the Suez Canal every day, the Ever Given was carrying over 10000 of these containers at the time of its grounding. So the blockage of this canal is now holding up an enormous amount of cargo in transit. This is why we have headlines like "ship stuck in Canal blocking 400 million dollars of cargo an hour". Lots of people are keeping an eye on this situation as indicated by the appearance of sites like https://istheshipstillstuck.com/. No doubt the canal will be cleared soon, but the issue is that a lot of supply chains and businesses might be substantially more impacted by an extra few days of delay on materials than they would have been in previous eras.

Part of why this is so newsworthy is that this disruption could actually form a really substantial supply shock now that the world is so dependent on container shipping if it remains blocked for a long time.

The grounding of the Ever Given has pointed out to me something about the nature of "Just in time" or JIT logistics that I think is deserving of being talked about far more.

JIT logistics are far more susceptible to various tail risks than other logistics approaches. Often JIT logistics gets increased efficiency at the cost of more impact by tail risks, things that are a "once in a [timeframe]" events start to impact more badly when they happen.

When JIT logistics fails it tends to spectacularly fail, as we saw with the toilet paper panics of 2020. In that case stores that had started to rely on JIT logistics in order to reduce the amount of storage space available at the stores (to save real estate costs presumably) started to have a lot of difficulties getting their toilet paper supplies restocked. This shortage persisted a lot longer than the initial supply shock (which was caused by a non substitutability of commercial toilet paper rolls with residential ones, see the linked article for more about this).

However there's a particularly insidious dynamic with JIT logistics which is that it transforms some situations that could be easily handled by using slack capacity in inventory into much larger problems. When the tail risks manifest because they are by definition lower probability events psychological forces start to come into play that makes people very tempted to deflect blame onto the "unforseeable" nature of rare events. In particular it's the rare nature of these events that gets people into a trap, they can say "we couldn't have foreseen this" as a way of not taking responsibility for what happened. This is troublesome because JIT logistics profits from getting the balance right between immediate inventory and improved regular operations against increased downsides from things that aren't immediately obvious because they are less frequent but more costly events when things go wrong.

To make this more concrete, let's say you run a specialized manufacturing business and some of the suppliers and manufacturers are East of the Suez and some are West of it. You might decide to change your logistics to have less slack capacity by changing your shipping model to be closer to a JIT model. This might have some pretty tangible and easy to categorize short term benefits like not needing as much warehouse space for example.

But then 2020 rolls around and there's a pandemic, movements of ships get constrained because port workers can't come to work due to lock downs and other such disruptions.suddenly your lack of warehouse space and lack of spare parts goes from a money saver to a massive liability. You could say "oh there was a once in a century pandemic, we couldn't have seen this risk coming".

Then 2021 rolls around and a container ship gets stuck in the Suez, your shipments are stuck on the boat behind it and all of a sudden that lack of spare slack capacity in the warehouse is once again shifting from a saving to a massive liability. You could say "oh there was a freak accident an a ship got stuck in the Canal, we couldn't have seen this risk coming".

The issue with JIT logistics is just this, you are opening yourself to far more downside when these sorts of events happen. JIT logistics increases the amount of "rare" events that can hurt your throughput, and there's a lot of rare events that happen each year that you just don't tend to think about if they don't impact you. Then when unexpected events do happen, especially if they are bizarre or uncommon events, the temptation is to get caught up in how uncommon the event is and not recognize that the JIT logistics choices were a significant source of the risk. While you may not have control over these freak events you do have control over the processes you choose to use and not every process has the same risk exposure to outside events.

Far too many people I'm sure have been caught up this event thinking it's unprecedented for the Suez Canal to be closed when in fact the canal was closed before due to the events of the Suez Crisis during which the Canal was closed from October 1956 to March 1957 and then closed again for much of 1967-1975 (the trapped boats were known as the Yellow Fleet.

Perhaps the crucial factor here is slack capacity in supply chains. Slack capacity allows you breathing room when things go wrong. But also slack capacity has been very much out of fashion in many circles of management lately. Goldratt's Theory of Constraints work formed a great conceptual basis for understanding overall throughput in manufacturing systems, or any complex systems that have interconnected stages. Put simply a system's throughput is limited by the slowest portion of it. If you want to get the maximum throughput you need to have the slowest section at full capacity as often as possible, even if that means that other systems have to be idled sometimes. The issue in practice is that in many modern organizations it's often extremely hard for staff to deliberately run sections of a process deliberately under maximum capacity. The lack of systems thinking at an organizational level often manifests as KPIs for managers that look to increase utilization for processes in isolation of the rest of the system.

Take for example ocean going cargo shipping. The capacity of the worlds seas for boats is so vast that the probably of any two ships colliding when out in the open seas would be vanishingly small if those ships were taking random paths. However ships don't take random paths and there's a concentration of ships at various points, like the Suez Canal. You could have an enormous amount of cargo travelling on the open seas but the constrictions will be things like shipping canals and ports. So keeping those portions at maximum capacity is very important for keeping the overall throughput high. We see this impact with the Suez Canal blockage, because this is a lower capacity part of the system a blockage here impacts overall transport throughput far more than a ship grounding at some other location.

The main issue with JIT logistics is that you are removing slack capacity and gambling that the benefits you get from this will be bigger than the downsides when things go wrong. To be very clear this is a gamble that's entirely worth taking in some situations. But what I'm trying to say is that when things go wrong in rare events don't get caught up in the rareness of the events, rare events make up a substantial portion of the expected utility calculation that must be made whenever you are making these decisions.