Lately a whole lot of things in crypto have been crashing. LUNA/TerraUSD is one of the most spectacular hyperinflationary crashes (good writeup here): 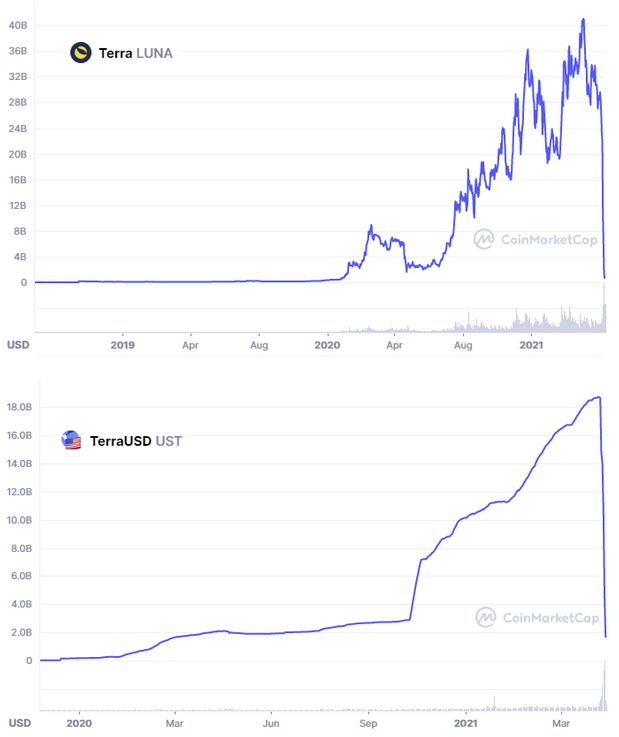 Then LUNA 2 has already started to crash just days after its launch and I'm still shocked that LUNA 2 got any investors after LUNA failed so spectacularly, especially given there was at least one video out there with Do Kwon saying that LUNA had a rug pull feature built in. But perhaps I'm underestimating the extreme greed some have in this space. This to me shows the huge importance of doing your own research before investing, if you don't its easy to buy into things that clearly have no value. We also see potential troubles in HEX:

My article about Crypto's potentially upcoming "Leahman moment" talked about how the implosion of LUNA and the pending problems deep in the plumbing of the highly leveraged space around crypto might be leading to a spectacular crisis moment. A while ago I wrote about how highly leveraged services like Celsius were fundamentally unsound because in a market drawdown they just wouldn't be liquid. In any case Tether is probably the "big one" when it comes to providing liquidity because so many players in the crypto space use the USDT "stablecoin" to make transactions, this is one of the big reasons why stablecoins matter so much. The market cap of Tether has been dropping billions lately:

Now that we are seeing a huge drawdown in the crypto space we are seeing the highly leveraged organizations face extreme pain, some have already gone under and many more will go under if this trend continues because the crypto space overall is extremely highly leveraged. When times are good this leverage is extremely profitable however in a bear market this leverage can quickly turn from highly profitable into an existential threat. It seems the desperation with Celsius is growing, for example see this tweet, photo of it below: 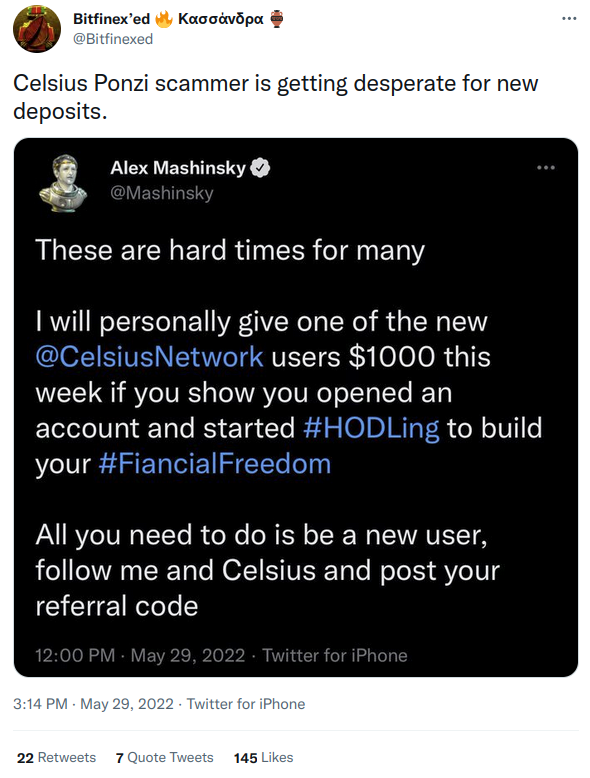 These are the sorts of tactics you tend to see when firms are getting close to being illiquid. We are seeing a lot of this in the markets so now is a great time to review John Exeter's pyramid again. 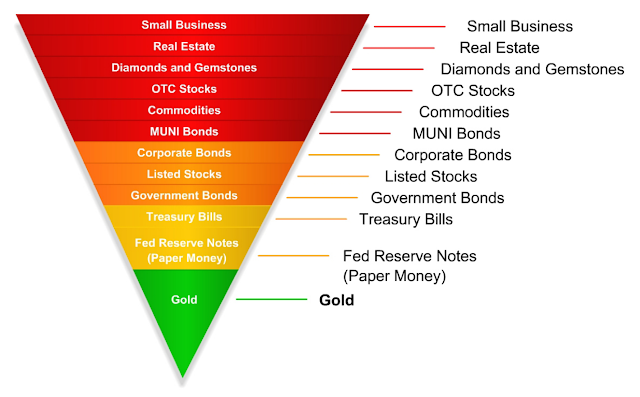 When there's economic expansion money tends to flow upwards in this pyramid. When there's economic contraction money tends to flow downwards in this pyramid. The bottom of the pyramid has far more scarcity than the top of it and in times of crisis the scarcity of assets matters more. When times are good there's a lot more options and things like derivatives that potentially have no scarcity whatsoever can be valuable just because there's higher returns on them that outweighs the risks. Now there are some assumptions in this pyramid that might need to be reassessed given the current global situation is what it is1, however the general principal is that the distance you are away from tangible scarce assets matters.

Now running with the idea that Bitcoin is "digital gold" for a moment, it should be fairly obvious the direction that funds will flow in this collapse. I think in the crypto space BTC is a bit like gold at least in terms of the way in which the currency is not inflationary, the fixed number of coins is an important property. The shared idea that it's valuable is also something that has some parallels to gold. Gold is in many senses valuable because for thousands of years it has been seen to have value. The crypto space is so new as far as things go but BTC is one of the more established players in the space and has been around much longer than others. To be clear I do think there's fundamental differences between gold and BTC, with both serving different needs but there's definitely something to be said that their relative positioning in the pyramids is much more towards the bottom than the top.

Highly leveraged plays, especially derivatives, will see massive losses in the upcoming bear market. The counterparty risk will mean that many will lose on their derivative positions because their counterparties will default. This is why it's so important that if you are in a bear market you hold BTC instead of BTC derivatives like futures and why you should hold gold rather than any of the sketchy ETFs that are based on gold derivatives. Now is an especially important time to understand the details of the futures markets and to carefully read the prospectus for any ETFs you are holding. Even if you have read the prospectus, make sure you check to see if there's been changes since many funds are changing their terms quietly at the moment. Many people will lose everything and will later say "but nobody could have seen this happening" as a post hoc justification, which is of course a bullshit excuse, read the prospectuses and do your own research now before you lose everything. Many of the risks in this current market are entirely predictable if you know how to analyze the data yourself.